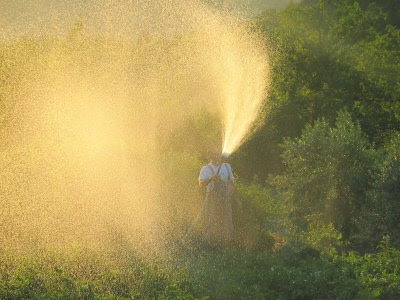 once the potatoes are growing and rain fails to fall, people come to their acres to add some water to their beloved plants.

with the well a few hundred meters way they pump this natural springwater up to their land and start spraying their crops.

only two sounds are heard, namely far away/below a soft noise of the motorpump, and closeby the falling of waterdrops spread in wide curves, almost like a ballet for man and waterhose.

the moment I saw the beauty of this simple and basic action I waited till the sun was behind Ante, the man spraying, and started to picture one shot after another, and this is the one shot I like most.
if you think life is only beautifull when there is ACTION, you're wrong !
the lack of "real" action and the relaxing sound it makes makes me feel happy.

which goes for almost every moment we spend in our little paradise in the valley of Svinisce, just behind the Adriatic coast.

ah, and yes, those potatoes taste better than any other.
which goes for everything they grow there. 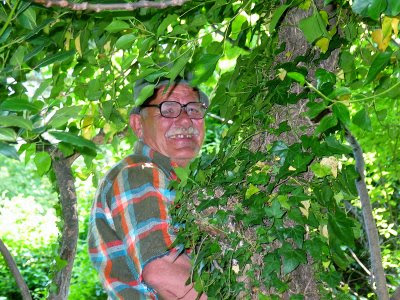 Nicola is his name, Nicola Tafra, but everyone calls him Mate.

mate is our neighbour, and a very special character.
in his young days he and some friends played with a german explosive, which ended in a severe injury.

he misses one arm, is blind at one eye, and has a load of other marks on his body telling the story without words: after the war is over only innocent die.

anyway, here he stand in a tree, cleaning it from ivy, and in case you wanna know, the tree was ours and we cut it down later.

sorry Mate, but thanks for the help, than and later on till now.
a special character, a good teacher to me, and a great friend to us.

there, deep down in the middle 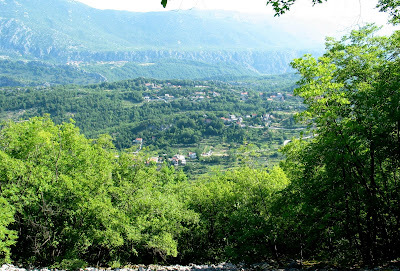 one day, at Sveti Vid's day (one of the many holy days in roman catholic Croatia) we walked up the mountainridge between us and the Adriatic Sea.

walking up the mountain on a hot sunny day, climbing about 500 meters, took us a couple of hours of hard swetting work.
there hardly is a path, only what seems to have been a path, and even that "path" is rather a passage through bushes, over rocks, as it actually was the walk goats from the village used to make, till the "goats union" decided about ten years ago that where people started to use cars it was unacceptable to keep goats walking.

so these footpathes (or should I say "clawpathes") slowly disappeared in nature, as only once in a year they're used by pelgrims and I to walk to the tiny white chapel on top of the ridge, where a priest stood waiting in the open air, valley on the left and deep down on the other side even more deep the blue sea.
not being a churchgoing believer I stayed a bit aside, while a crowd of about hundred joined in his service, singing and listening to his good words.

and even the priest showed to be all human, as once finishing his "job", he took of his official clothing to join in a marvelous picnic, as each of the crowd had taken some drinks and food to this gathering.

fried chicked, roasted courgettes filled with melting cheese, home made dry ham, local cheese, good bread and of course, white and red wine from everybody's own wineyard, and even worse, the strong rakia and local derivates, with herbs, walnuts, cherries managed to get to the top of the mountain.
holy shit, no booze for me please, some small bites, a tiny bit of wine, a gallon of fresh water, that's all I needed, as going up was already heavy, but going down was double as long and twice as heavy, as I knew because I like to study detailled maps in advance.

a strong advice to hikers/walkers in croatian summersun is to at least take one liter of water, of possible even two, some sweet stuff, and a little handtowel, to soak and hang over head, neck or shoulders to cool a bit when things get hot and water is far away.

returning after an extremely nice social event, we walked the ridge, wide, rough and full of herbs for alcoholic picnics to come, slowly descending along a little mountainrefuge, following a rocky canyon filled with giant boulders and broken trees.
recently we had a massive rainfall during the night of about 150 liters per meter, creating a lot of problems, sliding hillsides, blocked roads and clearly visible here, a thundering stream of water gushing down to leave a chaos of rocks and wood.

all together going up and getting down again took an impressive five hours walk (ex. picnic), with somewhere in the walk the moment that I took this picture (click to enlarge), where deep down in the centre lies our own little hidden paradise, right to that white house.

*) thanks to Saint Vitus, who died 15 of juni 313 AC under the rule of Diocletianus, who's palace is still a major monument to visit in the old Roman town of Split.

this is not our cat 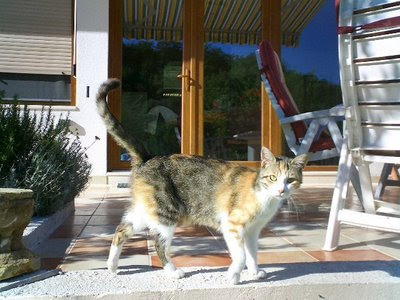 how to say a cat is not your cat but is your cat anyway ?

she and her brother are so to say free cats, born in the wild, living a wild life in the wild.
and where her brother, a black and white slightly distant male, gets his attention a couple of houses away, this lady turned out to be charmed by our looks/smell/attention/food, and however I am not a cat's person, she decided otherwise.

being nasty during a couple of days, pooring water, making noise and silly movements, even not taking a shower for a period of time, nothing helped, so I finally fell for her persuation.

she liked us, came back and back again, and finally adopted us (not us adopting her, mind you), and forced us to give her a name.
so we did, and therefor she's now Sissi, after that princess once played by the late Romy Schneider.
(her black&white brother got the name Macho, which he is not, but he carries his name with pride).

I won't go into catstories, so this is an exception, as the picture was sent to us by our family overthere, showing she lost a bit of weight.
not due to a lack of food, we take our responsabilities serious, so we left three bags of her favourite catfood together with instructions to our neighbour, thanks Mate !!, to at least once a day provide her a nice meal.

the reason for her weightreduction is that she finally got rid of a bunch of youngsters she was carrying during our recent stay.
we witnessed the intimate loveconnection between her and "William of Orange", a red male from a couple of houses down the road and however it was wham, bam, thank you ma'm, it was bullseye as well, as we saw our Sissi grow over a couple of weeks, and wondered when and where she would be a mother, and how the kids where looking.

dozens of times she tried to sneak into our little appartment, but each time I managed to prevent a total take over.

enough is enough, but a man's got to stand for his principles.
nevertheless we offered her many secluded spots, where she could safely give bearth, but never saw it happen as she was still going heavier with no birthmovements, and we had to return to our "beloved" NEEderland, cloudy, wet, noisy, flat, crowded and ongoing intolerant.
so finally she gave birth, under a golden sun in Godgven nature, with the tender care of us, even when we're "here" and not "there".

so, nice place, nice cat, and nice look over the base of our terrace, the sunny shadows and the smelly rosemary on the leftside in the border.
and of course, the newly placed suncover (thanks Richard and team), wrong colours perhaps, but hey, it was a bargain and its very practical.

what you grow is what you get

it took me some waiting for a dry day, when the potatoes started crying for some water and as always, a bit of luck with my camera.
however, what's luck when you wait for that specific moment, look and look again, move in several directions till the light is right behind the object, and finally see what you want to see in the picture you want to tell the story of.

having agricultural neighbours working their small pieces of land on terraces up and down our own piece of land, growing potatoes, onions, olives, cabbage and melons, they take great pride in taking care of the best crop to get from it.

hardly any synthetic fertiliser being used, but ripened sheepshit in stead, combined with excellent ground and a bit of help to mother nature spraying the plants with water from a true natural well when the ground gets dry and the weather hot.

it's all there is to it, with a lot of tender love and care, of course !!!
everone regularly comes to his land in the afternoon, to work for a couple of hours to keep everything nice and tidy and growing well.
but it's all worth it as you get the best food you can eat, and so they care, like everybody in our valley including us, for their plants.

your foodquality is not something to get from european regulations, labels and loads of industrial nonsense, wrapped in plastic and commercials.

good food comes from good people taking good care of good plants on good ground !!!
if it looks like a melon, be sure that what you eat here IS a melon, and not it's green sister, "killed" before it even grew up to be a real tasty, sweet, sunripe, gorgeous melon.

stop reading here, go to your supermarket and tell those idiots that by killing your food they are killing you as well !!!!