this is not america 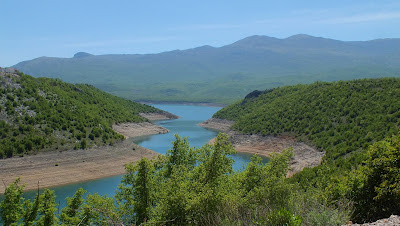 (Picture by http://www.malimlin.com/, the most friendly touristservice in Omis, Dalmatia).
Have been a couple of times to America (and many other countries), and had a great time overthere for sure.
Since we live in Croatia however, the need (or urge) to cross borders and travel for hours and hours has gone.

For example, this is nearly 1.5 hours drive by car from where we live, and somehow this view reminds me of a part of the USA.
The lake on the picture is called Perucko Jezero, a part or Cetina river, and still I think the whole Cetina area from beginning to end is a miracle and deserves a book to be written about her.

From "head to tail" it's about one hundred kilometers long (or a bit more), but it's character constantly changes and when digging into it's history you'll be amazed, like the old Romans allready were.

It's that stunning combination of history, sceneries, nature and it's total diversity in such a relatively short trip that keeps me from going elsewhere.
Why should I, living in a small country like Croatia, with such a large load of treasures ?!