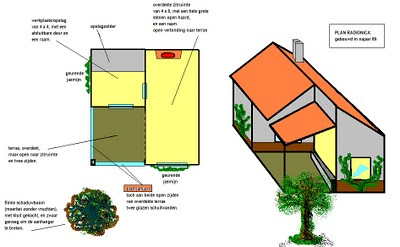 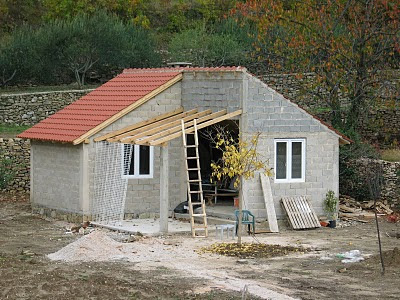 Everything has a reason, even the unexpected.

Having the land we have but not to much space to put our gardenstuff, chairs, tools and much more away, one day last autumn I said "why not build a little gardenshed on the new peace of land we bought"

With the help of some good friends , we started to do “something”, guided by just a small peace of paper with some "idea".
So, out of the blue, this little 8x8 mtrs. gardenhouse grew within four weeks, with a radionica (hobbyspace) for myselve, a huge fireplace for everyone to enjoy just like that or grilling whatever there is, and lots of space to sit and relax on even a shitday with bura or jugo(strong winds), pooring rain, but still that view on Mosor Mountain.

Must still finish in- and outside, the small roof over the terrace, tiles on the floor to be done, and maybe even two glass doors on the terrace "just in case", but its already a great new part of fullfilling our dreams.
Posted by nedcro at 21:38 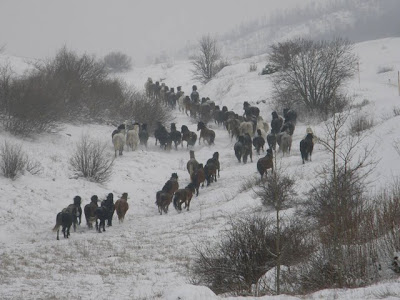 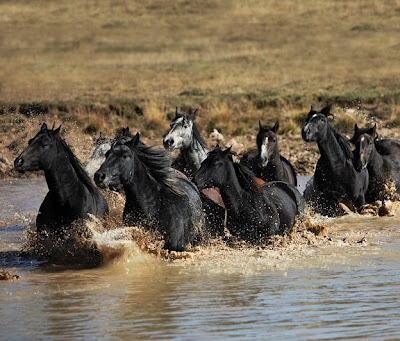 First I must admit both pictures are taken by other people, of which the one with the swimming group is part of a series of pictures taken by the photo-club in Imotski and the winter one by the organisation that was taking care of the protection of this magnificant wild bunch.
www.fotoimota.hr/gallery/displayimage.php?album=244&pos=9 and www.divljikonji.org, both highly interesting and worth a compliment.

To tell a bit more about these horses, a group of about 200 wild animals, they live in the rough nature near Livno, a traditional and interesting town, not so far over the Bosnian border.

Coming from Croatia it's a good one hours drive from Split to Livno.

Like I told before and will tell over and over again, there are a lot of hidden treasures in the neighbourhood of Svinisce, and this is one of them.
Not only is Livno a highly recommendable goal for a day behind the Adriatic coast, with many old mosks, and a river coming out of "nothing", where "nothing" is a high cliff dominating the panorama of Livno, with high above, on top of the cliff the remains of an old Ottoman tower.

When small farmers in the last century (+/- 1970) where heading from the countryside to the cities to find jobs, many gave their horses back to nature, where they surprisingly well survided the harsh climate of hot summers and freezing winters.
At the moment the group totals about 200 animals, coming together or splitting up in smaller groups depending on season and circumstances.

Recently the town of Livno decided to start a protection programm, as these noble animals are fantastic to observe in their natural habitat, the impressive plains and mountains around Livno, and an excellent tourist attraction.

So if you're visiting Croatia and you love nature in its most natural shape, spend a day (or two) heading for Livno, and the horses that live there.
The trip is taking you up Dinara Mountains, leading into Bosnia-Herzegovina along Busko Jezero, a beautyfull large lake with thousands of birds.

If you plan to make it a one day's visit:
enjoy ending the day coming "home" at the Adriatic coast, looking at the sundown, drinking a glass of local wine, smelling the herbs around you, listening to crickets having their Mediterranian summerparty.

You won't be disappointed, you'll have once in a lifetime experience and just like me, you'll have another reason to come back to either Croatia or Bosnia time and time again.

PS :
(crossing the border in your private car (check allowance on leased cars) is no problem at all; just take your passports and international green car-insurance papers with you).

best wishes to all 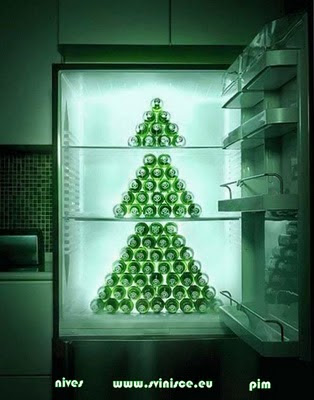 However still a lot of new developments have to be showed (and there's a lot to show and tell), this is the moment for best wishes.
So here we go: best wishes to all, for Christmas as well as the year 2010.

Enjoy these days in happiness, friendly intimacy, reflection of a year gone by and a new one to get started.
A child was born, a new year is awaiting with 365 days, each day getting born again when the sun goes up.

Today rapidly turns into yesterday, so don't take anything for granted.

Merry Christmas and a happy Newyear to all.