if not a car, you can eat it 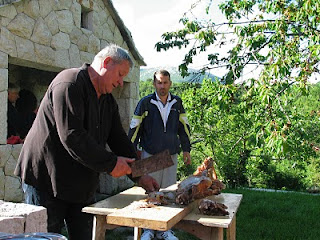 just kidding, croats enjoy eating, especially togehter with friends.
anything from nature, growing, walking, flying or swimming that looks like food is welcome.
and being springtime, the young vegetables are excellent company for some fish, meat or snails, often from the grill, sometimes in a juga (soup).

this season is the best to taste a young sheep (janjetine) from the grill.
fresh springonions, salade, bread and domaci wine, and most important: FRIENDS.

I was invited to party with the neighbours (the men !!!), so a young sheep was turning around over a fresh woodfire for about three hours, untill it was excellent food for a group of about twelve men.

gathered around the table we spent a great meal together, accompanied with local wine, until the first songs were sang.

the only croat that does not sing is a dead croat, so each and every moment they sing.
working in the fields, sitting together over a well deserved cold beer, after dinner, you name it, they sing.
"klapa", the croat singing tradition goes far back into history, and hundreds (thousands ?) of songs are an important part of cultural tradition.

many songs are shared, known and joined by each and everyone, recent ones, older ones and to my surprise (what do I know of it all) from various parts of former Yougoslavia, and even from far back from history.
especially those golden oldies, sang by older men of women, I like very much, as they are pure and unpolished.

this afternoon , standing onder a cherrytree, after an excellent meal, the singing went on and on and on, and when moved to the local cafe of Mali Ante, it went on till late in the night.
(somewhere later in the evening I decided to quit, as to me enough (drinks) is enough).

thanks folks, you're a great bunch !!! 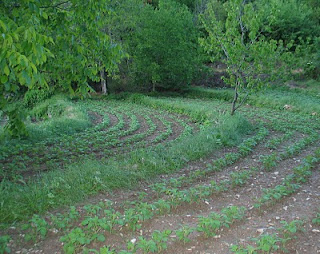 Coming from Holland, where all potatoes grow in straight lines in large fields this is what I like more, much more !

Small patches of furtile land, with cherry and walnut trees in and around it, I am certain that these potatoes will have a happy life, ending as french fries in hot oil, or as the company of some true meat under a peka.

This is not the mass agriculture our Dutch farmers fill supermarkets with, loaded with furtilizers and chemicals, this is the traditional "domaci" agriculture, in our hidden valley of Svinisce.

When the seasons get hotter the owners start to spray water from a genuin natural well, and if there is a problem with what they call "colorado's", those striped beetles the trick is to check each plant for small eggs of that little bastard and kill them manually.

No chemical sprayings, only once in a while some old sheepshit (gnoj), and lots of TLC (tender loving care).

I was (again) surprised by this little polje, almost like a cropcircle from "outerspace", but no, this is just human activity on a tiny bit of land.
And those cherrytrees, well, they are just there to offer a handfull of juicy red spring delights while working around the potatoes.

If you want to eat potatoes, than keep in mind that what you put into it is what you're gonna eat from it, no less, and much more !
And if that is a genetically modified chemically grown thing, well, the choice is all yours.
(But I prefer to have my fries from these brown buddies growing under a cherrytree in Modris, part of the community of Svinisce).

communication is a great thing 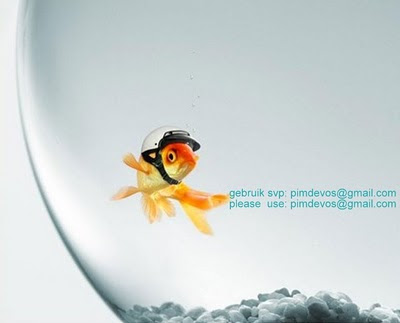 Sure there is much more to tell, as we just arrived in our little bowl.
Still the view is fantastic, and the sea close to it all.

However, time is limited and so is the connectionspeed of our pc in Svinisce.
Happy to have internet for sure, but with a signal coming through the air in stead of a fast cable, it takes a while to get pictures into this blog.

And more important, as time is limited (with loads of things to do on daily basis), I will not enter as many things as I do when not "here" but "there".

Getting organised, connecting water and electricity to the new gardenhouse, and still a huge amount of things to plan and do, mostly a pleasure, but still on the list "to do".

Well, for the moment this is all, and MOST important:
PLEASE MAIL ME AT GMAIL (and forget about the planet one, as it takes hours I rather use reducing the to-do list or just relaxing in the sun).