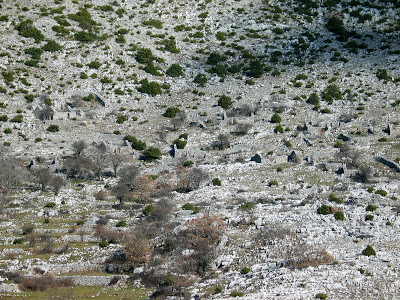 Do click to enlarge this picture !
Than think back to when people used to survive here ages ago.
Picture taken in Biokovo Mountain Park.

Yesterday, me, my wife and two local friends went to Biokovo once more to enjoy the snow on the higher parts of the mountain.
The lower parts (up to 700 meters.) are hardly ever seeing snow, the higher parts however (up to 1800 meters) are packed with snow, lots of it (even up to 3 meters thick).
Currently snow conditions are less, next week however there might be another load coming, as the winter ain't over yet.
(If interested in weather conditions, click here: Biokovo weather).

We took a lot of pictures, this one however is special, as it shows an old "forgotten" little village.
Houses in those days, hundreds of years ago, where built from whatever available, and as you can see rock is the number one material here.
Thick walls were piled up, some wood to construct a roof, then covered with more rock.
Hot during the day, especially in summer, cold during winter, both night and day.
(Stone cold indeed :-).

Life on the mountain was harsh in those days, with tiny minimal patches of land to grow a very basic amount of food ( some potatoes, some cabbage, a tiny apple tree or plum, and if possible some grapes and olives).
Goats always survive, sheep sometimes, and if lucky a cow and a donkey.
(So milk they had, to make some cheese to store for a while).

If lucky !!!, as this was, is and will always be true nature.
With wolves, boars, chamois, rabbits and snakes, and.......a lack of water as this is karst, where water easily disappears into caves (which there are a lot of).

What made people decide to live here, were the uncertain conditions along the Adriatic coast and inland, where occupation was as usual as the sun coming up.
Romans, Venetians, Turks, Austrians, Russians, Italians and Germans (no hard feeling folks, times have changed), and a lot more, including pirates.
Not the best conditions indeed to spread a towel and enjoy the sun at the Adriatic.

So people fled up into the mountains, and survived the conditions there, creating a minimal life with whatever possible or available.

After WW2, under the rule of Tito, living conditions at the coast increased, and the industrial revolution brought jobs and good housing to many inhabitants.
A good moment therefor to come down to the coast, and leave those damned slopes.

What stayed are these remarkable forgotten villages and single houses, melting into the rocky landscape.
You'll see many of them on Biokovo, but also in many other parts of Dalmatia's hinterland.

On many locations you'll witness how tough these people were, cleaning little patches of good soil from rocks, piling them up in numerous walls, fixing the soil against sliding away under heavy rains.
An amazing people in an amazing land.